Deep down, I know it makes no sense to do a book review this way, but this explains my reaction the best way I know how. After I finished The Long and Faraway Gone (great noir title, right!), I momentarily became 1983 Jim Valvano. Yes, I’ll explain.

Remember the scene after North Carolina State crazily won the NCAA basketball tournament in 1983. They can’t win it, of course, but they did anyway. And running across the court, looking for someone to hug, someone to celebrate with him – is Wolfpack coach Jim Valvano, arms outstretched for anyone to accept. 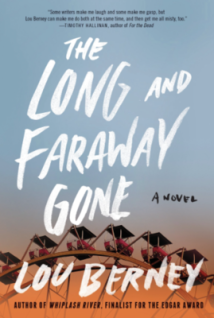 That was me after I finished reading Lou Berney’s third book. I had to talk about it with someone. I had to make sure this was correct, that I’d just finished one of the greatest stories I’ll ever read. I haven’t thought that for years, so I don’t say it lightly. I begged my wife to read it immediately, then stole the book she was in the middle of so she had to comply.

For me, the story resonated so well that I was in anguish at the end. Both because it was over and I wouldn’t get to spend time with these characters anymore, a feeling these characters knew all too well; and also, because part of the ending was so painful to endure.

Okay, enough about me. Sorry, but I had to get the picture out there. Brief dive into the book, then quit reading this and pick up the novel. Kirkus calls it “a mystery with a deep, wounded heart. Read it,” they conclude. Good conclusion.

The story follows two separate events that occur a month apart in Oklahoma City. The first crime is a brazen movie theater robbery where five of the six employees are killed. The lone survivor narrates his portion of the subsequent story. The second tragedy, a month later, focuses on the disappearance of a teenage girl at the State Fair. While this is fiction, the backdrop mirrors two events that occurred over a two-year span in Oklahoma City.

The story takes place twenty-six years after these events, and follows the two survivors: Wyatt, sole survivor at the theater; and Genevieve, younger sister of the teenager missing (and presumed dead) from the State Fair. But this is so much more than a mystery. It’s a poignant exploration of memory and what it means to be a survivor. It’s a redemptive tale of two individuals incapable of having a meaningful relationship in their world and how they’re able to overcome the long odds of re-entering that world. As such, this character-driven mystery ultimately delivers the goods and gives the reader a delicious taste of redemption by the end. I’ll echo Kirkus: Read it!

9 thoughts on “Book Review: The Long and Faraway Gone by Lou Berney”