Saturday’s Mystery of the Week, starring Neil, Buzz and Michael was all about Apollo 11. Michael Collins is often the forgotten astronaut aboard Apollo 11. He didn’t walk on the moon, instead dropping off his two pals like they were heading to soccer practice and then picking them up afterwards. 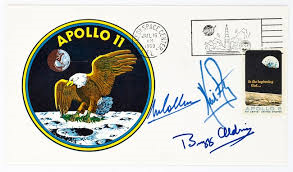 One of the most interesting sub-plots about Apollo 11 surrounded autographs. Because the astronauts were leaving family behind, they wanted to act like responsible adults and sign a life insurance policy. However, from the point of view of the insurance company, it was like insuring Evel Knievel before he gazed across Snake River. (Knievel, by the way, was turned down 37 times by Lloyd’s of London.)

So typical life insurance was not an option for the Apollo 11 crew. But fame was, and even without eBay the crew knew there was a market for their autograph. Especially for something called “covers” – envelopes signed by astronauts and postmarked on significant dates. They launched a plan.

While in quarantine for about a month, the astronauts signed hundreds of covers. Gave them to a friend. On important dates – launch day, landing day, etc. – their friend got them to the post office for a postmark. Then they were distributed to the families. So if something tragic happened – a highly possible outcome – the families would have an income source to take care of food, clothing, college and other things. Just like insurance.

After the successful mission, the famous astronauts probably signed tens of thousands of autographs for free.

Enjoy your week, and thanks for stopping by. Stay tuned for the next Flash Mystery of the Week.

4 thoughts on “Mystery of the Week … Solution”